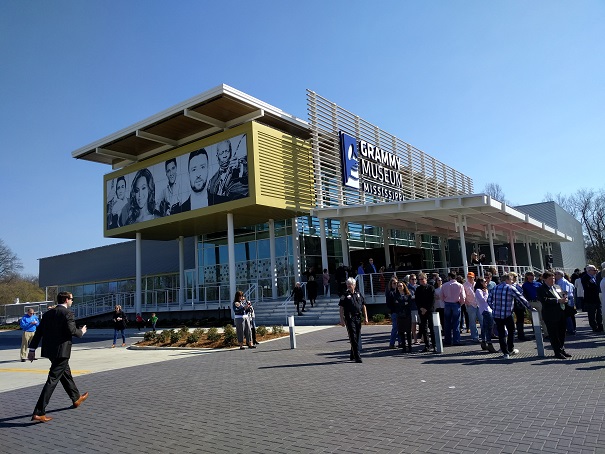 Last weekend was special in Cleveland. A major project, which had been underway for five years, finally reached completion. I am referring to the Mississippi branch of the Grammy Museum. Many people have heard of the Grammy Awards and the organization behind them, the National Academy of Recording Arts and Sciences. They have a museum out in LA which “explores and celebrates the enduring legacies of all forms of music, the creative process, the art and technology of the recording process, and the history of the GRAMMY Awards, the premier recognition of recorded music accomplishment.”1 Unbeknownst to most outside the Delta, the Recording Academy has also been quietly building a second branch right here in Cleveland, MS.

The whole thing has been in the works for nearly five years. The Recording Academy wanted to expand their brand outside of Southern California and after extensive thought and planning (plus a fair amount of lobbying of course), they selected Cleveland as the location. The museum is physically located on Delta State’s campus and sits right next to Highway 8. The University put in a lot of work, including relocating part of its golf course, and leased the land to the Recording Academy. Actual construction started early last year and after several delays, culminated in the opening ceremonies on Saturday.

On the inside the museum is wonderfully sleek and modern. Far from being a collection of dusty old records, there are dozens of computer terminals presenting information from the history of the Grammy awards to the history of the music industry. There’s a recording booth, a dance floor, and even a set of instruments which play into headphones. The designers even included a section devoted to the history of music in Mississippi. It is equal parts entertainment and education making for fun for the whole family. Best of all much of the museum, if not all of it, is unique to our location. So rather than air dropping the one from LA into the middle of the Delta, the designers created something special which reflects the rich history of the region. Sadly I have few pictures of the inside. I only saw it briefly a few days prior to the official opening and did not get a chance to really explore much.

Right about now many of you are wondering exactly how the second branch of the Grammy museum ended up here instead of New York, Memphis, or Nashville. Part of the answer seems to be the local chamber of commerce. When the Recording Academy began looking into locating their new branch in Mississippi, key figures in the chamber supposedly began lobbying for it to be located in Cleveland. Sadly I don’t have much more inside baseball although the town is said to have contributed a significant amount of money to the museum’s construction. However the location is definitely appropriate given the significance of the region. The Delta Blues was invented nearby at Dockery Farms.   Many great Blues musicians came from the Delta and so it has a rich history. Since Cleveland is geographically in the center of it along its major thoroughfare the Grammy Museum would be just the thing to get people to stay in town for a while. So a lot of folks have been excited by this for quite some time.

Privately, however, people seem skeptical. Cleveland is still two hours from the nearest airport. There is still little to do around here beyond Delta State and the Blues Trail. So it is hard to imagine tourists flying in from across the country just to visit the Grammy Museum. Perhaps Blues tourists will be motivated to give Cleveland a second look, but not many people are expecting success.

All the same, these sorts of things can thrive in small towns. Cooperstown is one-tenth the size of Cleveland and pretty much in the middle of nowhere yet the Baseball Hall of Fame is located there. Jackson, NJ is similarly far from anything yet Six Flags Great Adventure is there. And Mount Rushmore is in a more isolated location than Cleveland. So an optimist can say the Grammy Museum stands a chance.

Then again, maybe not? We need to remember this is the Delta. Cooperstown has a quaint charm to it and is located not terribly far from an interstate highway in upstate New York. Six Flags is also located near a highway and has the advantage of being in the Northeast corridor not far from Philadelphia. And Mount Rushmore is, well a mountain. Profitable or not it is going to be there for the next 100,000 years or so.

To be honest I’m not sure which side I’m on. The Grammy Museum is awesome and having it here is a helluva coup for a small town. But the criticism is well taken. The Delta is the Delta and I doubt even a great new museum will substantially change its fate. The region is still dealing with decades of out-migration and under-investment which have left much of it desolate. I am confident the Grammy Museum can spur some growth and business for the area, but the long term trends are what they are. It is going to take much more work to change them.