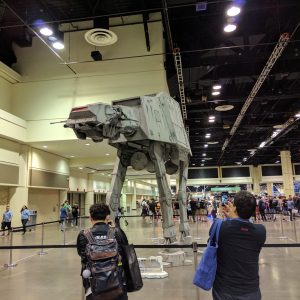 As some of you may remember, back in 2015 I went to Star Wars Celebration Anaheim.  It was, needless to say, a great time.  Having not been to a Star Wars convention in five years I was seriously excited.  This was also before the new movie came out.  I had only recently gotten into Star Wars Rebels and finished The Clone Wars.   So the excitement was building.  Us Star Wars faithful were finally getting some juicy tidbits after a long drought.  In my personal life, I finally had the money to go to a convention of any sort in years and hadn’t done much in the way of traveling in a while.  In other words, the stage was set for a good time.

Such a time was had by all.  For the first time I camped out overnight and got to see the big panel event and the latest trailer for The Force Awakens.  In the process I met four guys who happened to be there by themselves.  We hung out for all four days.  I saw the first two episodes of Star Wars Rebels months before the rest of the public and got a few cool pictures.  Everything seemed to just fall into place.  Truly it was a transcendental experience.

So naturally when Lucasfilm announced the next US Star Wars convention I jumped on it.  In 2017, they returned to Orlando.  Being drive-able from Cleveland meant no expensive airfare.  Moreover I’d already been to the Orange County Convention Center and so knew the lay of the land so to speak.  And with Star Wars: The Last Jedi coming out, I knew there would be some sort of news or a trailer.  I was fully prepared to relive my 2015 experience.

The reality turned out to be a tad different.  Let’s start with the good.  With the exception of one guy who lived in Orlando, none of the people I’d met in Anaheim were able to make it to the convention.  Knowing that, I decided to not leave things up to random chance.  My initial plan was to wait overnight for a panel and hope to meet some new friends.  But that’s risky.  First off I could just as easily have ended up spending 15 hours by myself reading a book.  Moreover, the big rooms in Orlando were half the size of those at Anaheim. So there was a greater than average chance of waiting all that time and not actually getting into the panel I wanted.

So I decided to do two things.  The first was to seek out a group of Star Wars fans in advance.  I went through a couple of venues, from message boards to podcasts.  There was one I listened to which accepted donations via patreon and in return gave donors access to a slack group.  I’ve wanted to join it for a long time and the convention was the perfect excuse to do so.  That turned out to be a good idea.  While I actually spent much of the convention alone, I had something to do basically every night.  Also I now have a community of fellow Star Wars fans to interact with every day.

The second thing I decided to do was skip the overnight experience.  It was a tough choice, but in retrospect was a very good idea.  Unlike in 2015, at Orlando Lucasfilm had two such events as there were two huge panels for which they knew people would wait overnight.  That really wasn’t a big deal for me.  Of more concern was the size of the rooms.  While the Orange County Convention Center is a huge place, Lucasfilm has never used the entire space.  So the largest stage in 2017 only held about 3000 people for a convention which ultimately drew 70,000 people.  Between the too small rooms, the fact the panels would be streamed live over the internet anyway, and my own need for sleep I just couldn’t justify it.  Having driven to Orlando I didn’t want to start off the convention by not sleeping.

They say Star Wars fans come to conventions to wait in line.  It was supposed to be a joke, but in 2017 turned out to be the reality.  By 5pm Wednesday night, fully 18 hours before the opening ceremonies, hundred of people were already in line. And I had plans Wednesday night anyway.  Hanging out with my new friends from the Slack channel was a higher priority.  Sleep came next.  While part of me wanted to jump on the end of the line like I did last time, I decided to make the rational choice and hit the sack.

As it turns out I was able to see the opening ceremonies from the exhibit hall.  No one mentioned it, but apparently most of the big events were shown there too.  Also everything streamed was posted to YouTube.  Moreover the entire thing was apparently a disaster.  The whole weekend the staff members, to the extent there were any, didn’t seem to know what was going on.  Security was no better.   Worse, the organizer (a company known as ReedPop) put everyone waiting for the opening ceremonies into one line.  So it was entirely possible to wait overnight and not actually get into the room with the live panel.   Such a thing happened to several podcasters from Tosche Station.

Then there was the line to actually get in.  The convention center in Orlando has about 7 entrances, but on Thursday they only opened one.  Behind it was an airport-style security checkpoint, which was about as much fun as it sounds. It quickly turned into a bottle neck with the line wrapping around the building and going down the street.  I got in line around 8:15 or so and didn’t get into the convention center until after 9.  It’s never taken that long in the past.  Then I had to find my way to the line for the exhibit hall.  Literally almost no one knew where it was.  It took me a good 20 minutes to pin down where it ended.

The rest of Thursday and Friday went well for me.  I totally avoided The Last Jedi panel and watched it later on YouTube.  It turns out I didn’t miss much.  Other than the trailer we didn’t really learn anything.   I mostly avoided the autographs as well.  My plan had been to steer clear of the autograph hall completely.  They’re expensive and time consuming to get plus this year a different company (Topps) was handling the process.  Since the beginning an outfit known as Official Pixs did the autographs and I was skeptical about how Topps would handle things.  Such skepticism was warranted.  It took me 45 minutes to buy one ticket for Denis Lawson’s (Wedge Antilles) autograph.  In order to handle demand Topps set up a system similar to airline boarding.  People were divided into groups

based on when they bought a ticket, starting with the letter A.  Unfortunately they wouldn’t tell you in advance what group you were in, forcing one to buy a ticket without knowing where in line you would be.  And the tickets were day specific so you had to guess which day would be least crowded and hope for the best.  Then on your chosen day you had to wait around the autograph hall (which was far too small) listening for a staff member or volunteer to call out your group letter.  The result was hundreds of people milling around the area trying to listen for one person to give them the all-clear to get in line.  And the lines themselves weren’t well managed, either.  When I was waiting for Lawson’s autograph, the line for another celebrity was flowing into his.  It was a mess and I’m thankful I got Mark Hamill’s autograph at Anaheim.

So I avoided the worst of the convention by avoiding basically anything popular.  This included Mark Hamill’s tribute to Carrie Fisher and a few other things as well. I attended several talks put on by Star Wars authors and a panel about upcoming books.  These were all very good.  Jason Fry was particularly entertaining and I enjoyed listening to Timothy Zahn talk about characters.  By Friday evening, however, I was not happy.  Never mind that all of the panels I skipped were being recorded.  I was upset with myself for having not even tried to get a wristband for a panel on Friday.  So Saturday morning I showed up around 7am to attempt to get into the Star Wars Rebels panel.  Not only did I do so, but I got into the live stage and had some good conversations while waiting in line.  Being able to say I was in the room when they announced Rebels was ending feels good, even if the effort to get there didn’t make any logical sense.

That’s the thing about Celebration.  So much of it makes no sense when you actually think about it.  We fans spend $1500 – $2000 or more for the pleasure of waiting in line, wading through crowds, and sitting overnight for news which is immediately available elsewhere.  When viewed that way, it’s ludicrous to attend.  Yet there is so much more to Celebration than all of that.  It’s really all about the social experience.  More than anything else, that is what we can’t replicate elsewhere.  Celebration is a chance for Star Wars fans to spend four or five days surrounded by other people who are as passionate about the franchise as they are.  There really is nothing else like it.

Of course everyone has their own reasons for attending.  Some go to shop, others to get autographs, and some to go to panels.  Those are all perfectly valid reasons.  However as Celebration grows every year most of those things become harder to do.  So for me, it will always be a chance to make new friends and reconnect with old ones.

I ended everything on Saturday night at the 501st bash.  Last time this was an awesome good time.  This year, not so much.  Weird Al Yankovic performed for about 45 minutes.  However he sang mostly obscure songs and as it turns out I’m not a huge fan of his.  Before he came on the DJ played mostly cantina music.  The party might have picked up later, but I had to leave early as I was driving the next day.  Still I got to hang with one of my friends from the last convention so it wasn’t a total waste.

Overall it’s hard to call Star Wars Celebration Orlando a huge success.  I personally had a good time.  However there were a myriad of logistical problems.  Some people are calling for attendance to be capped at around 40,000 or so.  I feel such artificial scarcity would hurt people unable to plan in advance.  At the very least, ReedPop needs to have adequate space and staffing levels.  What happened this year is unacceptable.  Other cons, including New York Comic Con which ReedPop runs, go smoothly.  Still I was able to have fun.  So while I don’t know what the future holds, I am leaving the door open to ramble back to the galaxy far, far away.