A year and a half ago, I wrote that Cleveland is a divided land.   The legacy of segregation is clearly on display.  The white community and the black community seem to exist in largely separate spheres, interacting only at Delta State, Walmart, and Kroger.  Otherwise people live their lives totally apart.   I haven’t really seen a lot of overt racism, but the pattern is clear all the same.  Yet its easy to put the reality out of your mind when you only live in one of those spheres.

But something got me thinking.  Recently I ran into a map which brought all the above back into focus.  Done right, maps can put things into perspective and show things in a completely different light.  This one was no different.  It was created by the  Demographics Research Group at the Weldon Cooper Center for Public Service at the University of Virginia.  They took aggregated data from the 2010 census and plotted it out on a map.  Each person is represented by a dot which is then color coded to represent race.  Of course I scrolled over to Cleveland, MS. Here are the results: 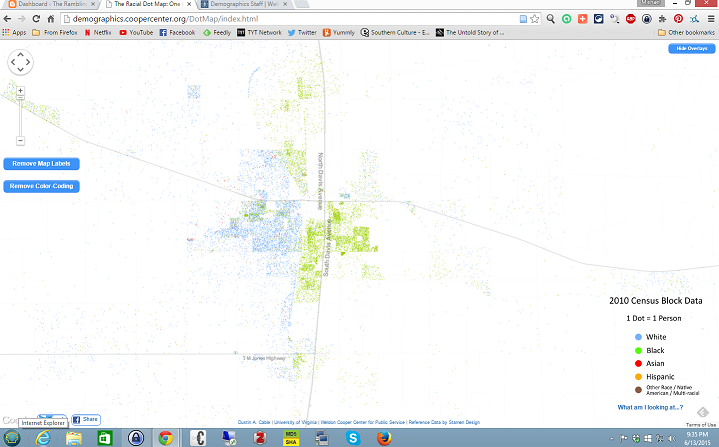 The visual representation drives home how starkly divided Cleveland is.  Historically the dividing line was the railroad which ran through the center of town.   The tracks are gone, but people still live on either side of where they were.   The only exception is Delta State which is the mixed blue/green area off to the left.

Looking at the map, I realized so much of my life is lived in the white part of town.   My apartment is two blocks from Delta State, all of my friends live within a few miles of it, and most of my favorite places are there too.  Clearly my perspective is shaped by life in only one part of Cleveland.  Suddenly calling it an oasis does not seem entirely appropriate.  The fact is, I have no clue what life is like on the other side of town.

When it comes to segregation Cleveland is not remotely unique.  The map does an excellent job of representing America’s racial divisions. They’re especially stark in big cities such as New York, Baltimore, or Philadelphia to say nothing of Detroit and St. Louis.   So its not fair to single out one small town just because its in Mississippi and happens to be divided along racial lines.

Ironically the African American side of town if the one people are most likely to see.  Davis Ave, which runs through the center of the map, is the local name for Highway 61.  As the main North-South thoroughfare in the Delta, it is the one route through which people are guaranteed to pass through Cleveland.   When they do so, all they see is Walmart, strip malls, fast food, and Cleveland’s African-American population.  To the uninitiated, the town must look little different from any other Delta town.  Everything which makes it special is off the beaten path and thus invisible to passing travelers and, I suspect, journalists.

My experience upon first coming here during my job interview reinforces the above point.  All of the hotels in Cleveland are located along Highway 61 and the restaurants I went to are not far from it either.  So my first impression of the town was of a flat land filled with a giant Walmart, some fast food joints, a few strip malls, and a lot of poor people.  Delta State is in a nice area and the library’s Assistant Director drove me through the neighborhood around it, but it was a whirlwind tour.  In any case, we ended up going through some less desirable areas where I saw more poor people and a broken down strip mall.  On top of everything, the weather was cloudy and dreary much of the time.  Cleveland seemed like the saddest place on earth.

It wasn’t until I began living here that I realized there are a lot of cool things happening.   The problem is they are well hidden.  Not only is the most developed part of town off the beaten path, but the inhabitants don’t really advertise themselves.  Many people in Cleveland aren’t too keen on self promotion it seems.  And there is no reason for them to be.  If you work at Delta State and have friends who live in the nearby neighborhoods there is not much incentive to tell strangers about your life.  On top of that a lot of the natives are rather insular.  Its possible the local culture is hidden by design.  The only time we all come out of our collective shell is when Teach for America arrives in June.  Of course in that case there are more incentives than usual to put on a good face and show the newcomers around.

Nevertheless Cleveland is still a great place to live.  There is certainly life on the other side of the tracks.  The Senator’s Place is on that side of town.  I’ve also heard great things about East Side High School.   It may not be an oasis, but the town is still far more developed than most others in the Delta.