When New Yorkers mention the word Deli a few things come to mind.   Usually they are cold cuts, cheese, and potato salad.   Typically a deli is the sort of place you go to get those things by the pound.   Sometimes they come with bagel shops attached.  And every supermarket has its Deli section.
Down in the Delta things are different.  The supermarkets have their deli sections of course.  But the word has a very different meaning.   As with pizzerias there really is no equivalent to the New York deli.   Even in the supermarket the selection tends to lean towards generic things such as turkey and roast beef.  It gets boring after a while.
That is not to say that there is no such thing as a deli per se.  It’s just that places that get labelled as such are shops which look like Panera Bread.   Take McAlister’s for example.  It is a sandwich shop originally from Oxford, MS.  They serve all kind of soup, salad, and sandwiches plus their famous sweet tea.   There are none in the Delta although I went to one in Starkville on the way back from Atlanta.   I actually really liked it.   Unlike most places you don’t have to stand around waiting for your food.   They give you a number and then bring it to your table.  While I only had a cheese sandwich, it was a very good one.
It was, of course, not an actual New York Deli.  But really it doesn’t matter.  I didn’t move to the Delta expecting everything to be just like home.  The food and the atmosphere were both really good.  And the price was reasonable too. That is what matters.   The only down side is that, being that there are no locations near Cleveland, I now know what I am missing.   Oh well.   Complaining about what you are missing will only bring misery.  Life is best when you sit back and enjoy the ride. 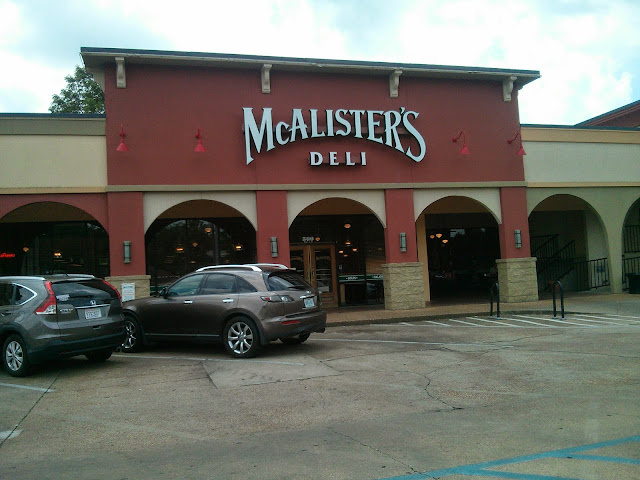