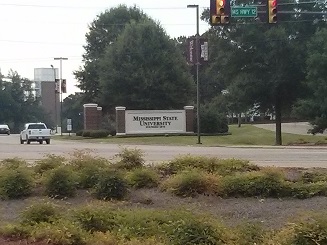 The trip was work related.  For the past year I have been chair of a group made up of users of Delta State’s library management system.  We have a conference every year and this time it was held at MSU.  All the same it was a great opportunity to visit an institution I’d previously known only by reputation.

Located in Starkville, Mississippi the University is nestled in the heart of what is known as the Golden Triangle region.  It encompasses an area in the eastern portion of the state a little ways south of Oxford (home to the University of Mississippi) and bordering Alabama.  I’d been there before.  On my way to Catapult Showcase in 2014 I stopped at the McAlister’s in Starkville.  Its right across the street from one of MSU’s entrances.  However being Memorial Day weekend the place was deserted.  In any case, I did not get very far into Starkville.

This time was different.  Owing to a wrong turn out of my hotel I ended up driving through the heart of the town.   It felt as if I’d accidentally dug up a pot of gold.  On either side of me were rows of strip malls, stores, and restaurants.  I saw Ruby Tuesday, Buffalo Wild Wings, even a Cold Stone Creamery.  In Starkville, I found everything Cleveland lacked.  Here was civilization with all its amenities and traffic.  Sadly I did not have time to stop.

Of course the bulk of my trip was spent on the campus itself.  Mississippi State University has around 21,000 students making it about seven times the size of Delta State.   It is one of the “big three” schools in IHL which get the most students, funding, and notoriety.  MSU, along with Ole Miss, are part of the SEC and their football games are an even bigger deal around here than the NFL.

So as one might imagine, the campus huge.  Its also seriously confusing to drive around.  Both of the schools I attended in New York were largely built around the same time by Governor Nelson Rockefeller in the 1960s.  Their design is relatively straightforward: main buildings clustered in the center with a road around the outside.  But MSU is more spread out and haphazard making navigation difficult.  My suspicion is most universities in America are built in such a manner.

The buildings also had that classic American university look.  I once went to the University of Maryland at College Park and MSU looked somewhat similar.  Standing on one of the quads (pictured below) in front of the library, I could not help, but be impressed.  Except for the building labelled “chemical engineering” (or something along those lines) I wasn’t sure what went on in any of them.  But I could feel the weight of learning which happened within their walls.  Delta State is a regional university, a teaching school.  Its a fine place to work.  But in Starkville, I was standing in the big leagues. 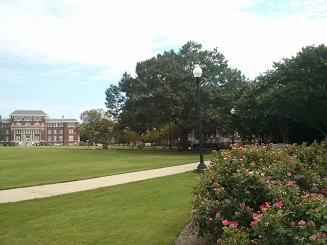 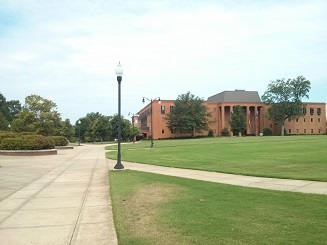 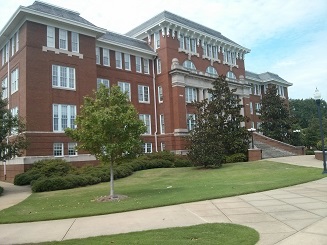 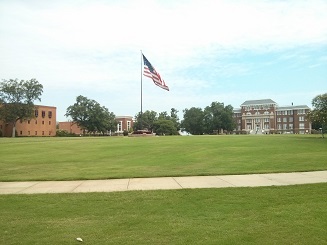 Mississippi has a reputation for being impoverished, but in Starkville one can see the picture is more complicated.  It is here where the other half lives.  You see it in the sprawling campus, the constant construction, and the enormous frat houses.  There’s definitely a lot of money floating around Starkville.  Delta State manages to stay afloat, but we’re dwarfed by the big dog in the yard.

Of course most states have a flagship school (New York is an exception).  My understanding is the University of Mississippi holds that distinction around here. But MSU certainly do a lot of work around Mississippi.  The MSU Extension Service operates offices across the state and their library leads a consortium of 50+ public and academic libraries.   Thus I’ve always had warmer feelings towards MSU than the University of Mississippi.  Ole Miss is tucked way up in the north near Tennessee and they mostly stick to themselves.

Being around such a big school reminded me of the possibilities within reach.  Academia is a huge place, spread out across a vast country.  At times the Delta feels as if its the only place on earth.  Everything is so far away.  Excursions such as these keep me on my feet.  I don’t know what the future will bring, but I can certainly dream.