During my trip down you may recall that I posted pictures of as many of the state flags and welcome signs as I could.   Conspicuously absent was that of the state I now live in.  Let me do so now: 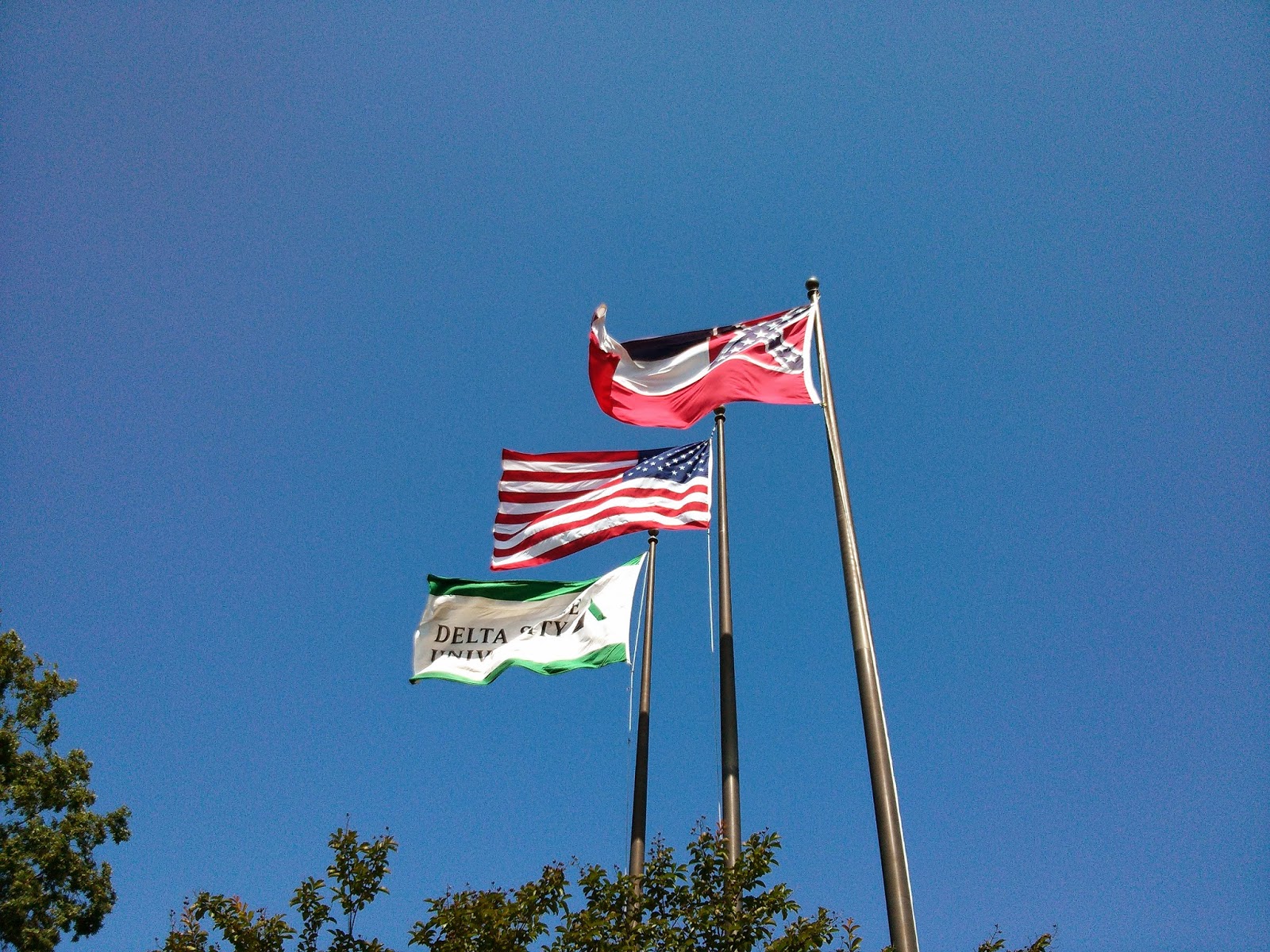 The Mississippi state flag is the one closest to the foreground.  It is impossible to miss the confederate battle flag embedded in the corner.  In fact the whole thing looks like the actual Confederate flag (known as the Stars and Bars). At the time I felt the image would generate more controversy than a new blogger like myself wanted.  But with the government shutdown it can feel at times as if there are people in this country still fighting the Civil War.

Yet it is one of the things that people stereotypically associate with the South in general and Mississippi in particular.   My current state is the last one incorporate the confederate flag into its own.  The funny thing is though, I have only seen one person flying it in the five months that I’ve been here.  One might expect the state home to Ole Miss and the Confederate Flag to display its Civil War history more openly.

Unfortunately I don’t have solid answers other than to say that the situation is complicated.   The Southerners I’ve met have certainly been friendly, but those people I consider to be friends are all from elsewhere.  And I’ve heard anecdotal evidence that Southerners aren’t as welcoming as they let on in public.  Yet my suspicion is that people’s actual feelings are complex.  As I noted two weeks ago, old habits die hard and people tend to not question the assumptions they grew up with.  But at the same time people aren’t openly displaying symbols such as the confederate flag. There is probably a reason for that.  It is worth noting that even during the Civil War not all Southerners were necessarily secessionists (Louisiana, and New Orleans in particular, comes to mind in this respect).  And the history of the flag itself is convoluted and as much a product of the 20th century than anything else*.

As I’ve been saying for a while, today’s South is not the South of the 1950s.  There are certainly people who cling to the lost cause and all that belief implies.  But I don’t feel they are the majority.  At least not in the Delta.  The story may be different in other parts of Mississippi and elsewhere in the South.  But many areas, like the Gulf Coast, have seen an influx of people from elsewhere in recent years.  The demographics are changing and presumably the culture is as well which implies a shifting of attitudes.  In other words, times change.  Nothing lasts forever, not even mountains and so it is reasonable to expect that people (especially Millenials) believe different things than previous generations.

* http://www.bbc.co.uk/news/magazine-23705803 Why Do People Still Fly the Confederate Flag? by Tom Geoghegan.  There are certainly other articles on the subject, but this is the one that got me thinking.